A Personal Story About Percy Sledge

Saturday, June 25th, 1966, my parents drove my friends and me into Hollywood to see the Beach Boy’s Summer Spectacular at The Hollywood Bowl. Twelve bands and artists performing in what was actually was a “specular” show. The performers that played that night were (not in order of performance) The Outsiders, Captain Beefheart & His Magic Band, Chad & Jeremy, Love, Neil Diamond, Percy Sledge, Sir Douglas Quintet, The Leaves, The Lovin’ Spoonful, The Byrds, and The Beach Boys. 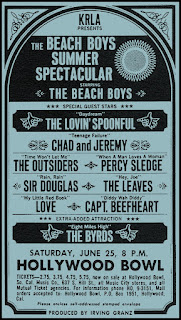 Neil Diamond was not the huge act he would later become. He performed solo, playing a Stratocaster through a Fender Twin amp. His guitar and amp was connected by a coiled cord with a broken wire, making his guitar cut in and out with a loud static crunching sound. That drew laughs and ridicule from my posse of friends. Really? Somebody couldn’t give him a better cord? It was The Hollywood Bowl for Pete’s sake!

Also among the performers was Percy Sledge. He sang his hit (then and for always) “When a Man Loves a Woman.”

The show’s producers must have told Mr. Sledge to stall. Maybe they couldn’t get the stage ready for the next act or something. But Mr. Sledge kept singing the song over and over. It seemed like there were and endless number of verses to that song. He would sing a verse, then start another. And another. And another! After awhile, or actually after many awhiles, the crowd started to groan when another verse started up… “when a man loves a woman.”

I don’t know how many times he had restarted the song, but at one point, at the beginning of another verse, I clapped a short applause. Maybe three or four claps. Like I said, it was short, but as I stopped clapping the audience around me started to pick up on it. Then the people around them, and applause went out in a circle until the entire audience was applauding.

Mr. Sledge knew he had over stayed his welcome. He waived his hand and bowed as he quickly trotted off stage without finishing the verse.

I felt a bit empowered and slightly big headed for starting that wave of ovation that was more telling the singer “that will do, sir:” then “we really dig your song, man.” I was also feeling guilty for starting the clap that initiated the bums rush to Mr. Sledge. I never meant to insult.

So now Percy Sledge has left the stage for good. No one was hustling him off this time. He left us with a genuine classic song that has kicked off countless slow dances for lovers. Thank you, Mr. Sledge, for all the verses. Your last applause is well deserved.

[Originally posted on Facebook, April 14th, 2015, upon hearing of the death of Percy Sledge]
Posted by Unknown at 10:08 AM No comments:

Look Here For My Posts